Just a quick note of apology for no posts these past couple of days, and for making This Week's Geek a little (ok, a lot) off the beaten path of all things nerd.  But this is one of those times when you have to use your platform to talk about things important to you...particularly those things that make you who you are.

Our eldest dog, Calypso, passed away Thursday.  She was nearly sixteen years old, and who we have often called 'First Dog,' as my wife and I brought her into our family just shortly after we had 'gotten serious' and moved in together, so Callie has pretty much been with us since Alexis and I have been a 'we.'  (Freya, our second dog, who I picked up at the local shelter just after we bought our first house the next year, just turned fifteen herself).  It's hard for me to believe, but I realized yesterday that Calypso had been with us for well over a third of my life, so much so that it seems like Callie (and Freya) have always just been by our side.  Callie was an amazingly sweet and life-loving creature...one-half Yellow Labrador and one half Siberian Husky, and her constant happiness and joy were infectious to everyone that met her. 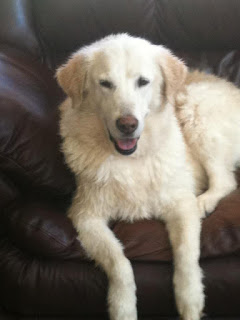 As she grew older, her hips (for non-canine folks, hips are the rear legs, shoulders are the front ones), grew increasingly weak and finally about four months ago she got up one morning and had some big discomfort in her neck and back.  We took her to the vet a day later and she had compressed three or four of the vertebrae in her back, and this was arguably the end result of previous injury that slowly progressed to this point.  Over the course of the next day or two, Calypso lost complete function and most sensation in her back half, and was effectively paralyzed in her rear legs.

We thought this was probably the end, but Calypso surprised us (and would continue to do so for the next few months).  Callie adapted quickly to a new harness that we got for her which allowed one of us to carry her paralyzed half using a handle built into the rear of the harness and she could walk forward normally with her front legs while walking beside us.  The harness also has a handle over her shoulders, so we could easily use both handles to transfer her when needed, such as getting into the car or going down stairs. 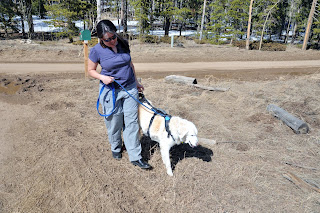 Calypso got so good with the Help 'Em Up harness that we were able to go for hikes again on the trail, and our last one was a beautiful one up a portion of a favorite trail in Golden Gate State Park. 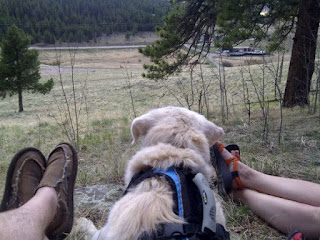 Calypso also tried out a canine wheelchair for a number of weeks, and after learning how to operate it, she would go for short walks in the wheelchair which helped strengthen her front legs, though she preferred the harness to the chair. 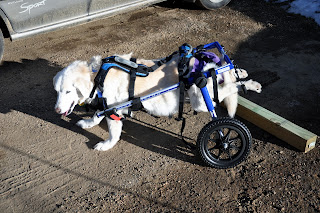 Aside from the fantastic care Callie got from Dr. Bethany Yurek and the Jasper Animal Hospital, much of Calypso's success after the paralysis also came from a rehabilitation program at Canine Rehabilitation and Conditioning Group (CRCG).  Callie attending weekly, and sometimes bi-weekly, therapy sessions, where she received things like E-stim therapy to help keep her rear legs from atrophying, an 'Endless Pool' swim tank where she could swim against a current, and an underwater treadmill, where she could exercise and condition her front legs while being supported by her own buoyancy in the water of the treadmill tank. 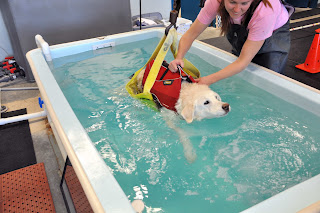 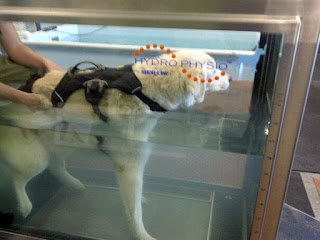 Callie loved going to CRCG, and immediately got excited for the car ride down to the facility, and often pulled me along from the parking lot into the front door (of course it may have had something to do with the fact that we usually went somewhere for a treat after a rehab day...like a Bambino cheeseburger slider at Good Times).

Calypso amazed us with her courage and determination with the rehabilitation program, her ability to adapt and learn to walk with the harness and wheelchair, and her continued happiness and joy and just being outside now and then to sleep in the grass.  She was a great example of the spirit that dogs and other animals can demonstrate to us humans.  I have been and will always be deeply touched and significantly inspired by Calypso's resolution and mettle, particularly for her advanced age.

However, we knew that Callie had a limited amount of precious days left with us once the full extent of her condition was known.  At the time her paralysis fully manifested itself, we told each other that any time we had with her was a blessing and a gift, even if just for a few more days.  As it was, we were given nearly four wonderful and amazing months to be with her.  One of the side effects of her paralysis was that she was very prone to urinary tract infections (she no longer had control of her urinary and sometimes fecal functions due to the paralysis) and the second infection she got about five or six weeks ago was extremely difficult to treat.  The infection and the antibiotics needed to keep it at bay slowly wore Calypso down until finally a week or two ago she simply had lost the energy to keep going.  She could only walk a few yards with me using the harness, and spent most of her time on her side sleeping all day and all night.  She began to exhibit signs of chronic discomfort, and some new neurological effects also began to manifest.  After a day or two of discussion of what we were seeing, Alexis and I decided that Calypso was telling us it was time to go, and we took Callie to Dr. Yurek for a final time so that our brave and tenaciously determined dog could finally be at peace.

We know that Calypso is somewhere now where she is her old self again...running full speed and jumping higher than any dog I had ever seen before, taking long naps in the grass of mountain meadows, and always in search of her next snack.  My greatest wish is that there is some opportunity for Calypso to have a chance to be a part of another loving family as she was of ours, and to bring the immeasurable joy and happiness to their lives that she brought to ours every day.  I'm pretty confident that in our world where there is so much needless pain, unnecessary suffering, and mind-boggling cruelty (much of which we often inflict upon one another), that there is still some form of process that allows a boundless spirit such as Calypso's to return to us and help us balance out such a lopsided equation.  Without the Calypso's in our lives, the universe is a cold and empty place indeed. 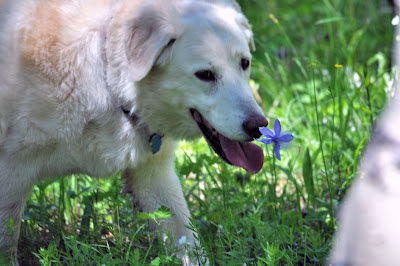