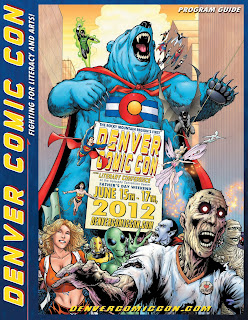 After a number of years of prep and expectation, the first ever comic book convention in Colorado comes to the Colorado Convention Center in Denver.  The inaugural Denver Comic Con is this weekend, June 15 to June 17th.  That's right faithful readers, take dad down to the Convention Center and get his geek on for Father's Day!

It's actually surprising that it's taken this long for a premier comic book convention to actually come to the Mile High City.  Aside from a gaggle of comic book artists and writers, D.C.C. will host animation and voice talent actors like Billy West (Futurama) and Tom Kane (Star Wars The Clone Wars), and TV and Film names like Bruce Boxleitner (Babylon 5), Colin Ferguson (Eureka), Kristin Bauer (True Blood) and Jasika Nicole (Fringe).

Aside from hundreds (literally) of exhibitors, don't miss the Nerd Rock Music Festival at the Hard Rock Cafe on Saturday night, the Costume Shindig, or grab a beer a the Breckenridge Brewery where they have the official D.C.C. brew, the Fantastic Pour (no, I'm not kidding).

I'm DJing weddings on Friday and Saturday, but I may be tempted to run down just to say I was at the first Denver Comic Con...maybe... :)