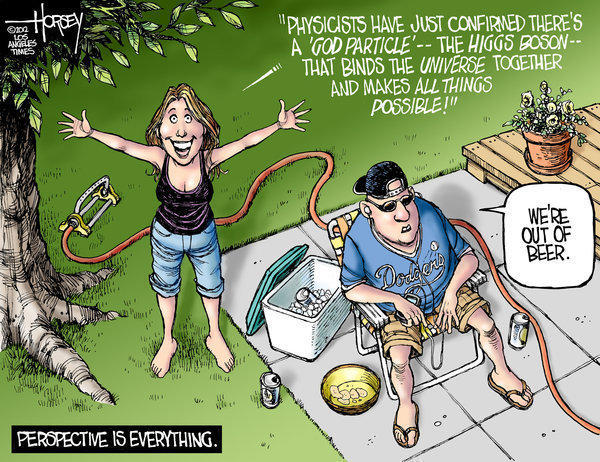 Stephen Hawking lost his $100 bet.  What is been hailed as a cornerstone of modern physics has been confirmed.  The Higgs boson particle, often referred to as the "God Particle" and one of two sub-atomic particles theorized in quantum theory to make up everything, has been found at the CERN Large Hadron Collider in Switzerland.  Hawking had infamously made a $100 bet with Gordon Kane of Michigan University that the Higgs particle would never be found.  Hawking suggested Higgs receive the Nobel Prize for confirmation of his particle; Higgs first suggested the existence of the Higgs boson 48 years ago and was personally told by the famous Werner Heisenberg (of the Heisenberg Uncertainty Principle) that Higgs 'didn't understand the rules of physics' as a 26 year-old physicist.  Professional suicide was more the feeling at the time for Higgs rather than a Nobel Prize future.

CERN has announced the discovery of a new particle which is consistent with theories about the Higgs Boson. Although they haven’t proven it is definitely a Higgs, there is little doubt in most experts’ minds that the sought-after particle has indeed been unearthed at last.

Is this confirmation a big deal?  Simply enough, yes!  It's the last missing foundational piece of the Standard Model of Physics explaining what everything - you, me, the tree outside, and the Universe - is made of.

The cartoon above (awesome by the way...props to David Horsey of the Los Angeles Times), says it all though.  And Horsey's OpEd piece on the discovery ends with some deep thoughts and really meaningful statements that I really appreciated:

The news about the "God particle" is one of those challenging bits of information that can make everything else feel terrifyingly insignificant. It is a reminder that each of us is merely a tiny, carbon-based organism existing for a brief moment on a small planet that, by the scale of the universe, is no more singular than a grain of sand on a beach. We are dust in the wind, utterly inconsequential in the dark expanse of time and space.

At least that's one way to look at it. Another way to see it is that, in all that vastness, only we are aware of the awesome complexity. Only we strive to know and understand. All the rest is mere physical phenomena. What we do in our brief lives on this small planet may be the only thing that matters.

Thus, it behooves us to use our sliver of time well. We can waste it watching "Dancing With The Stars" or we can reach for the stars. We can squander it being petty, cruel, selfish or destructive, or we can be creative, compassionate, kind and just. The Higgs boson may glue this universe together, but we are the ones who give it meaning.