Back to D&D After Two Decades

So I was an avid Dungeons and Dragons fanatic from about 1980 to somewhere in the early 1990's.  As my typical group of friends that I spent long nights and even longer weekends with prowling such nefarious adventures as the Isle of Dread, White Plume Mountain, and Queen of the Demonweb Pits started to hit our 20's and eventually began going off to college, finding jobs and spouses, and generally growing up, we just stopped rolling the dice.  In that last half of the 80's, computers really started to take off as well, and I got pretty distracted overall with that explosion, which took me away from pen and pencil and tabletop gaming. Interestingly I have found myself making a full circle return to the kitchen table and the local game store over the past three or four years.  After I had moved beyond just dabbling in miniature wargaming, I found myself looking over from the Warhammer tables at my favorite game store (Total Escape Games) to the little room in the back where role-playing games and gamers were sallying forth with the exploits of brave fighters hacking and slashing their way through hordes of goblins, arcane magic users releasing fireballs from their hands to blast holes in the advancing ranks of ogres, sneaky thieves hiding in the shadows and backstabbing the troll that just walked into the cave, and righteous clerics curing the wounds of their fellow adventurers while turning and banishing a bevy of undead skeletons with their holy presence.  Something in me began longing to join that room and pick up a pencil, add some dice to my dice bag that had other shapes besides six-sided, and go crawl around in some musty and forgotten underground structure. 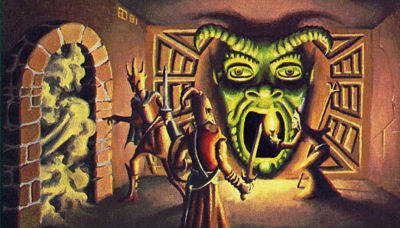 However, after a bit of internet research, I discovered, both to my amusement and some dismay, that D&D had changed dramatically since I had been rolling d20's.  To keep a long story short, what I had been playing back then, starting with 'basic and expert' sets of D&D and advancing to 'Advanced Dungeons and Dragons' was now known as 'D&D 1e' (1st edition), and there had been 2e, 3e, 3.5e (yea, I thought that was weird too), and now 4e, not to mention some other systems that had become a part of the D&D multiverse, such as Pathfinder.  (See my upcoming This Week's Geek on the history and state of Dungeons and Dragons for more.)  All that made me feel pretty old, as being one that played 1e and had no serious understanding of the e's that came after mine.  Suffice it to say, I caught up to speed pretty quickly. 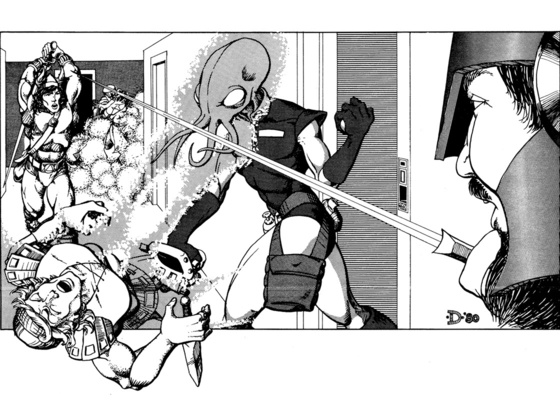 The real long and short of it was that 4e, the most recent and current iteration of Dungeons and Dragons, was not just an update and refinement to the original game, but an entire re-working of the system.  One would think that this was a good thing, but in many ways it hasn't been.  Interestingly enough, the whole affair caused a rather enormous rift in the audience of dedicated D&D gamers, and there are now two distinct camps...those that like D&D 4e and those that don't and play the earlier editions.  As with all things these days, the vehemence and flaming hatred between the two groups is appalling...so much so that the future of D&D seems grim.  So in an attempt to bring us all back to the table and let us play again, Wizards of the Coast (owned by Hasbro and who currently publishes D&D) has now begun to develop D&D Next (which is already being called 5e) and will be the next iteration of D&D, very possibly the last, and is intended to correct what some call the errors of the 4e debacle (of course there is a large camp that says there's nothing wrong with 4e in the first place, but again, see the future D&D post for this discussion).  The very coolest part of this upcoming release of D&D Next (IMHO) is that Wizards is using us, the players, to test out and suggest changes and modifications to D&D Next during it's development phase.  And so, the D&D Next/5e play test has been going on in the basements and kitchen tables of the gaming world for a few months now.

What happens is this:  You go onto Wizards website, and there is a page where you can sign up to be a playtester for D&D Next.  Then, after signing away all sorts of things like the standard confidentiality agreements and such, you'll get e-mail links on where to download the materials.  You get a basic overview of how 5e plays, some pre-made characters to play, a Dungeon Master's supplement, and module called 'Caves of Chaos,' which interestingly is a re-make of the Caves of Chaos from the original Keep on the Borderlands module from back in my day (everybody had a copy of B2...it came with the 'red-box' set we called the Basic set.) You then get together with your gaming buddies and play through the Caves of Chaos module using the playtest rules and the pre-made characters.  After getting through it, Wizards will ask everyone (players, DM, etc.) for feedback and play notes.  According to Wizards, there will be more playtest materials released and D&D Next/5e will adapt to what we, the players of D&D, want.  Again, there is much discussion as to what this actually is since everyone wants what they want, not necessarily what everybody wants, (this too will be discussed in more detail later), but suffice it to say that what D&D Next/5e is designed to do is to form some sort of system in which we can all play based on the way we like to play, that is fans of 1e, 2e, 3e, 3.5e, and 4e can somehow still incorporate the elements of those versions into their own games using the Next/5e umbrella structure.

So...how did the first round of playtesting go?

Frankly, I had a ball.  I had contacted a friend of mine (Marc) that I met through another friend who knew we were both big gamers, and let him know that I'd be interested in trying out a 5e playtest session if his group of RPGer's was getting one going.  Marc got back to me this past week and said they were beginning to playtest the Caves of Chaos on Sunday and I was welcome to join.  After some last minute location discussion, I met at the house of one of the other players, introduced myself to the guys I didn't know, and we sat down at the dining room table.

Suddenly, I was hooked again and it felt just like I remembered in the 'old days.'  We discussed the background world that the DM decided to fit the Caves of Chaos into, took our assigned characters (I took the human cleric, which I named Benedictus - Ben for short), and off we went.  We ate pizza and potato chips, drank sodas, rolled d20's with gusto, and made crude jokes about who was going to try and bed the female dwarf that was in the surveyor's group that we had been hired to protect while they explored the path and headwaters of this river.  Before the night was over we were beset by a small company of kobolds that indicated this was their territory and we were trespassing ('f@#$ing kobolds' I pseudo-complained to the raucous laughter of my new found weekly D&D group, 'every damn beginner module has f@#$ing kobolds' ).

We fought two waves of the foul and despicable kobolds during which my radiant lance spell just couldn't seem to hit the target.  However, just after I used my cleric's healing touch to bolster up the hit points of our dwarf fighter who had taken a beating, I cast my searing light spell on the kobold captain and scored a critical hit by rolling a natural 20 and left a blackened, smoking pile of ash where the tough kobold once stood and the sight of my heavenly scorching light burning their captain to a crisp made the remaining cowardly kobolds scamper off in fear.  We gave chase and ran down the vile kobolds and the night ended.  (It was like 9:30pm, and let's be honest, we're not 17 anymore and have to go to bed!)

(A quick note to all those that rant and scream about the current state of D&D:   get over yourselves!  As a player of D&D before there ever were 'editions' that has now returned to the table, you've forgotten why you play in the first place.  It was joy just to sit down, laugh with 5 friends, and simply have fun.  Yes, we discussed what we liked and didn't like, but in the end it didn't really matter...it was a game, and we had a blast.  Those of you who spit flames at each other over how this edition handles combat or whether or not magic is too powerful or not powerful enough, you've forgotten what it was like to just play.  Shame on you...)

I'm addicted once again to the world of pen and paper role-playing!  We are meeting weekly on Sunday nights to finish playing out the playest module.  The Caves of Chaos await, and 'ware any monstrous creature that dares to stand in the way of our surveying party as we make our way up the river.  There are dark and evil dungeons to explore, foul and smelly monsters to slay, fair dwarven maidens to protect (and possibly ravish), and fabulous riches to plunder.

However, I may need to replace that one d20 that kept rolling so craptastically before next Sunday night...damn cursed dice.