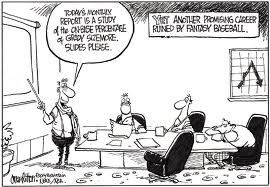 Surprised by this week's geek topic?  You shouldn't be.  What amuses me the most about fantasy sports is the fact that there are so many parallels and similarities to role-playing and tabletop games that every fantasy manager should be attending Star Trek conventions and wearing eyeglasses patched with electrical tape.  There's more Dungeons & Dragons here than meets the eye...

My amusement comes from ardent fantasy baseball nuts that will spend hour after hour preparing for their upcoming draft day and then analyze the crap out of each player's OBP and Slugging percentage until they're bleary-eyed and in dutch with their significant other for spending way too much time on the computer.  But point out that some tire salesman with a subscription to MLB.TV sitting at a sports bar with his buddies and discussing that Justin Verlander's WHIP has been outperforming Roy Halladay's is really no different than some pimply-faced high-school sophomore with a subscription to Dragon Magazine sitting in his parent's basement with a group of similarly black t-shirted nerds and discussing the THAC0 of the +4 Holy Avenger is arguably better than decent Two-Handed Vorpal Blade and the fantasy sports fanatic will scoff at the mere suggestion that they are in fact, geeks of the highest order.

Seriously, let's be objective about this.  Fantasy sports (need I point out the term Fantasy in the first place) is game about assembling a team of real life professional players in the given sport into a fake team that the manager (i.e. the person playing the fantasy sport) then 'manages' over a given period of time during the season of the actual sport.  Once assembled (for instance on draft day), the players on the team are then placed on a roster taken from the players on the managers fantasy team and 'played' in various ways against the other managers in the fantasy league.  The real life stats of the players are used to score fantasy points, all dependent on the scoring system utilized by the particular style of play the fantasy league is using.  In some play styles, the fantasy points may accumulate over the entire season, the winner of the league being that manager whose fantasy team ended up with the most points.  The league may also use a 'head-to-head' (H2H) style of play, where each week one team pits itself against another, and the points accumulated during that week determine the winner of the game week.  The season winner may then be the manager with the best weekly win-loss record.

Now, let's choose a typically accepted nerdy game to compare to fantasy sports...I'll use tabletop miniature wargaming.  Here, the player (often known as the general) assembles an army of either historical or fictional troops and equipment.  This can be anything depending on the system or game - infantry, armor, calvary, alien monsters, artillery, aircraft, etc.  Each unit has it's own stats for combat, movement, etc.  The general acquires the plastic, metal, and resin miniatures that represent the unit, assembles them, paints them, and then chooses from his collection of minis what to field in a given game against another general.  The generals place their collective armies on a large playing surface - often a 6' x 4' gaming table that is often decorated with terrain pieces to add flavor to the battle; hills, trees, bunker emplacements, burned out buildings, etc.  Each general takes turns maneuvering and committing their troops to combat against the other general.  The stats of each unit determine how combat and movement outcome is determined, and the element of chance is usually handled with dice.  Games are decided on victory conditions set at the beginning...capture and hold of a spot on the board, destruction of some element, or perhaps total annihilation of one side or the other.

So...see any difference between a fantasy baseball manager choosing the starting and relief pitchers that he'll put on his roster for the coming week and a Warhammer general choosing which units of High Elves he'll field in the coming battle?  Who is more a geek - the fantasy baseball fanatic that knows the current On Base Percentage of Matt Kemp is .04460 or that the Warhammer general knows that Teclis the Loremaster is a Level 4 Wizard?  Which is more nerdy - counting hits against, earned runs, and stolen bases of your fantasy players from today's real world games, or adding up hits, wound rolls, and their corresponding cover, armor, and magic saves from that shooting phase?  Frankly, not a helluva lot of difference here.

So don't even begin to tell me that fantasy sports is different than any other role-playing or war gaming system out there.  What could be more role-playing than assuming the role of a fake manager of a fake baseball team and playing other fake managers and their fake teams using statistics and random events to determine the outcome?  Pitchers and shortstops are no different than paladins and wizards, and outfielders and designated hitters are just like archers and spearmen.  Whether you talk about the fantasy game over beers and hot wings or over Cheetos and Mountain Dew doesn't make any difference...your still playing Cowboys and Indians and Cops and Robbers like you did when you were 3.

Now I gotta stop writing this post and go get my lineup set for Week 7.  Mat Latos has a two-start week coming up...