After last night, I need a little hair of the bigfoot... 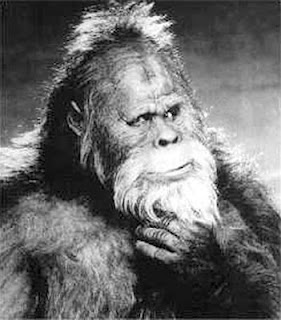 Researchers in Europe are looking for the samples of bigfoot hair that your grandfather left in that shoebox in the basement.  A research project planned by scientists at Oxford University and the Lausanne Museum of Zoology will use DNA and other genetic testing on Bigfoot and Yeti samples - hair, blood, and anything that Sasquatch may have been chewing on.  Results will be published in a peer-reviewed scholarly journal.  Experts seem to be on a consensus that the latest methods of DNA testing could solve the Bigfoot mystery.

Bryan Sykes of Oxford University said the group had already received many offers of samples to test, including blood, hair, and items supposedly chewed by Bigfoot. Sykes and colleagues plan to sift through the samples for the next few months before deciding which specimens to test.

I'm betting on at least one sample that genetically resembles my father's beard.


"If the Yeti is real and somebody has found bits of their hair, you should be able to tell from the DNA in the hair if this is actually a Yeti," said Mark Thomas, a professor of evolutionary genetics at University College London. He is not connected to the Bigfoot project.
But Thomas was unsure how likely it was anyone might have actual Yeti hairs. Some scientists theorize Yetis are either a distinct hominid species, or a mix between homo sapiens and Neanderthals or other species. There is already evidence of interbreeding between homo sapiens and Neanderthals.

I personally have seen evidence of interbreeding between humans and Neanderthals while I was still politically active...(probably not exactly what the researcher is talking about.)

Bigfoot is a legendary giant, hairy, ape-like beast that is variously known as Sasquatch, the Abominable Snowman, Yeti and other names. It supposedly lives in heavily forested or snowy mountains. Although most scientists don't believe in the beast's existence, decades of eyewitness reports, suggestive photos and stories have kept the legend alive.  David Frayer, a professor of biological anthropology at Kansas University, told The Associated Press in an email that "No serious scientist (would) treat Yeti as a worthy research project."
No serious scientist of that magnitude is much fun to party with either...

M.D.
@michaeldunkle
Posted by Michael 'Yoda' Dunkle at 8:29 AM