Came home yesterday and was excited to find my 2015 reprint of Twilight Struggle sitting on the porch! 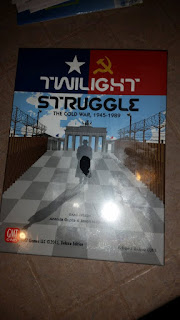 If you're not familiar with TS, it's one of the most popular board games of all time, scoring first in board games, first in war games, and second in strategy games on BoardGameGeek.

Twilight Struggle (the name is based on a quote from John F. Kennedy - see below) that simulates the Cold War era from 1945 to 1989.


"In 1945, unlikely allies toppled Hitler's war machine, while humanity's most devastating weapons forced the Japanese Empire to its knees in a storm of fire. Where once there stood many great powers, there then stood only two. The world had scant months to sigh its collective relief before a new conflict threatened. Unlike the titanic struggles of the preceding decades, this conflict would be waged not primarily by soldiers and tanks, but by spies and politicians, scientists and intellectuals, artists and traitors. Twilight Struggle is a two-player game simulating the forty-five year dance of intrigue, prestige, and occasional flares of warfare between the Soviet Union and the United States. The entire world is the stage on which these two titans fight to make the world safe for their own ideologies and ways of life. The game begins amidst the ruins of Europe as the two new "superpowers" scramble over the wreckage of the Second World War, and ends in 1989, when only the United States remained standing."  (From the box of Twilight Struggle by GMT Games)

It's legend within the gaming community...and I almost picked it up at a game convention about 4 years ago.  After that it went out of print and could be had for over $200 from owners.  But GMT Games is (IMHO) one of the most innovative game companies out there - mainly because of their P500 Pre-order program.  When they have a new game being developed or are looking at reprints of popular games (such as Twilight) they put it on their P500 program.  Essentially if a game hits certain levels of customer pre-orders then it goes to production and once it hits 500 pre-orders, it ships.  Pre-orders usually have a pretty good discount (for instance I got Twilight Struggle for $42.50 - normal price of the reprint is $65.00) and once that 500 order limit hits, the game autoships to your front door.  The coolest part of GMT's P500 is that customers truly get to have a say in what games are produced and reprinted...

Now I just have to figure out if I can get away with playing around on Christmas Eve with the Cuban Missile Crisis, Che Guevara, the Brezhnev Doctrine, and when to play the China Card.


@michaeldunkle
Posted by Michael 'Yoda' Dunkle at 7:59 AM