You know I've heard of this before...but never read up on it seriously.

Brian Cronin blogs in Huff Post about the Wampa Ice Creature in The Empire Strikes Back and whether or not the scene was created because of the car accident actor Mark Hamill was in prior to Episode V being filmed.

Legend has it that because of the injuries Mark Hamill suffered in the accident to his nose and cheekbone (pretty severe and corrected by plastic surgery following the accident) there was some concern on George Lucas' part that people would notice the difference in Hamill's face from Episode IV to V, so he had the screenwriters put in the scenes about the Wampa to explain the scarring on Luke Skywalker's face.

It's been a long running rumor that really has never been put 100% to bed, and even Mark Hamill himself once asked Lucas if it was true or not.

Cronin's discussion in his blog post is really well written and fun for any Star Wars fan/nerd to read.  (Be sure to catch the bits on Hamill's original casting in "Eight is Enough" and the contractual disagreements that occurred, as well as the interesting common bits with actress Annie Potts in the teenage boy-athon movie, Corvette Summer.

While we're talking Wampa...don't forget to pick up your own Wampa Rug from ThinkGeek to keep you warm this winter! 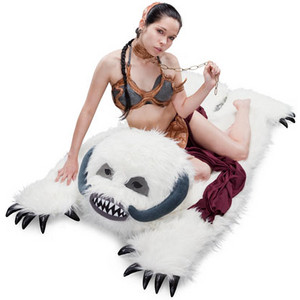