Age of Sigmar...Epic or Epic Fail?

So you pretty much had to have been living underneath the gaming table in order to have not at least heard of the recent Games Workshop's Warhammer Age of Sigmar reboot of Warhammer Fantasy Battles. I think it's fair to say that there's more foul spewing rants and bililious hatred than loving adoration and glowing praise from the fan base.  My current favorite is a F'book page that's currently running called, "The Rage of Sigmar."

In no way am I immune to the lure of Games Workshop Warhammer Fantasy Battles and Warhammer 40,000.  I've got a closet packed with ridiculous amount of fully painted 40K Orks stacked on top of a WHFB High Elf army.  But those greenskins have been gathering a lot of dust on their choppas, trukks, and Nob Warbikes.  While I absolutely love the miniatures of Games Workshop and love the fictional world of 40K even more (I've got a library of some thirty  Black Library titles), the business model of GW eventually became too much for even me.   The constant new versions of game rules, ever increasing retail prices of game components, and even the cost of White Dwarf magazine (~$190 for an annual subscription of 12 issues...seriously?!?!) drove me to stop updating my GW collection.

Simply put IMnot-soHO, Games Workshop is simply not accessible to the mainstream gaming world any longer.  The amount of income necessary to stay up-to-date and current with the GW world is restrictive and impractical, particularly for the 18 year old or younger gaming community.  Which in itself is shameful to say the least.  As a child of the early pen and paper RPG years, my love for gaming world grew by leaps and bounds in the early-80's.  But this was because we could buy a game and play it...over and over again.  Late nights spent rolling dice, scouring every issue of Dragon Magazine, and crawling dungeons led to all sorts of game systems, and while there is no doubt that a young gamer had to eventually upgrade to his AD&D Player's Handbook and Dungeon Master's Guide, those were one-time purchases, that really didn't change for a good decade or so.  By the time tabletop miniature wargaming really began to take hold, I had moved on from my gaming addiction and gravitated toward PC games...mostly because my gaming group had grown up, left for college, then left for good.  But my fondest memories of childhood still fall to those days when you carried your dice bag and three or four modules around everywhere, and the four legendary tomes of geekhood weighed your school backpack down far more than any textbook.

When I returned to the world of distant worlds and dark, dank caverns filled with beasts and monsters...it was via the world of Warhammer 40,000.  I started painting my first Orks in front of the television every evening...and after about 9 months I wandered down to a local game store and dove into my first battle of Space Marines and Orks.  From there I was hooked.  However, I quickly noticed that 40K really was more a sign of what a player's annual income needed to be in order to play the game.  When a new box of 10 Ork Boyz costs you around $28...you suddenly realize that the big army bag full of plastic spacemen cost you upwards of $300...and we haven't even added the cost of rulebooks and codexes.  Oddly enough those seemed to start getting new editions about every 10 months.

Now of course, I still have friends that play first edition D&D.  You can do that.  But seriously if you want to head to the game store for an afternoon of open 40K play, you have to keep up with the latest change and editions of the rules.  If you like to play in tournaments, you damn well better have the latest rulesets.  Those latest editions will cost you about $80, and the latest Ork codex is $40.  Which seems like a good investment...until 10 months later they are now a good doorstop, because the new edition just got released.  And guess what...that's another $120. 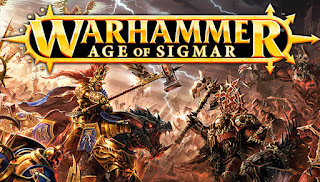 (Ok...for all my fellow GW and Black Library nerds out there...tell me that the Age of Sigmar doesn't look an awful lot like a bunch of Space Marines and Chaos Space Marines duking it out in medieval settings...)

Oh sure...GW put the new rules out for the time being for free via .pdf download.  Smart move...considering that they may have finally pissed off the worldwide gaming community that up until lately, will grit their teeth and put up with GW's usual shenanigans.  And that's because they didn't just update the system with some new rules...instead they scrapped it altogether and  put out a simplified version with little strategy and dumbed down play style.

Don't take my word for it...here's a few reviews from the more reputable gaming sites:

Best quote:  "Age of Sigmar feels like a slap in the face, punch in the gut, and kick in the balls all at once."

Best quote:  "This is a high quality, very well produced introduction to what is ultimately a middling game."

Shut Up & Sit Down quick take

Best quote:  "The new ruleset scraps point values for miniatures, leaving players to guess at what a fair fight might look like."

And perhaps the best review IMnot-soHO...

Best quote:  "It may seem a small thing, but Games Workshop’s blatant disregard for its traditions and the intelligence of its customers is probably the most troubling thing about this new version."


Sure...there's some supportive reviews out there.  This one from a Boardgamegeek's forum is pretty positive.  But it's one of the few.  In reality, what seems to have happened is that WHFB was really not bringing in a ton of revenue any longer...certainly not the likes of 40K.  GW needed to give things a reboot...and chose to possibly it's current player/fan base (arguably wasn't making enough money for them anyway) and try and attract a new crowd of players.  The Age of Sigmar Starter Box can be had for $90...and reports have it that it's arguably the first "almost complete" starter box GW has put out.  But it's not complete...and will require some greenbacks to build up a good army collection.  It certainly isn't enough at this point for me to sell my greenskins to upgrade to the replacement that is Age of Sigmar.

I think the best statement I've read is this quote, again from Geek Dad:

"Age of Sigmar therefore is potentially the last throw of the dice. If it turned out to be a great game’s death knell, I would be very sad indeed."

Seriously though...tell me these don't look like Space Marines! 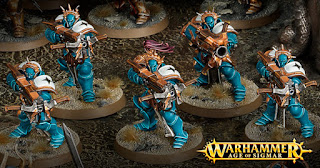