Happy Holidays everyone!  As it is the afternoon of December 25th, I thought I'd update with the latest (and arguably last) round of the Nerdapalooza Holiday Gifts that came my way today...with thanks and much love to my beautiful wife, who has been so good at displaying her own inner nerd as of late!

Let the gluttony of geekness begin! That's right fellow nerds...a full set of role playing dice crafted out of chocolate love!  For the uninitiated (and if you are indeed uninitiated to RPG dice, why are you reading my blog :-), this is a standard set of 4, 6, 8, 10, 12, and 20-sided dice, used for pen and paper role-playing for a good 40 years or so now, harkening back to the earliest days of Chainmail and Dungeon's & Dragons.  Now I just have to decide if I'm going to eat them myself or share them with my regular weekly gaming group... 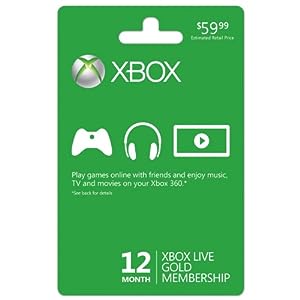 Why not simply have an Xbox Live account linked to a credit card?  Mostly because it's nigh-impossible to cancel an Xbox Live account once you've set one up.  There's more than one story of some innocent gamer trying to cancel an existing Xbox Gold membership that he/she attached a credit card to, only to discover that they ended up having to call Microsoft and then spend wasted hours lost in the subterranean caverns of automated voice menus and confusing phone representatives whose sole task is to prevent you from canceling that membership.  It's probably easier to take the MCATs and get into a good medical school than it is to cancel an existing Xbox Gold Live membership.  And let's not even go down the path of the possibility of having your account hacked like mine was by some loser hacker in China that snagged $50 off the credit card attached to my account before Xbox shut him down.  I contacted Xbox within 10 minutes of the incursion, and while I was promised to have a full refund either in cash or Microsoft points...it never came...even after two follow up calls ending in similar hollow promises.  But with a game card membership, there is none of that...no credit card to steal, no account to deal with...just online gaming glory.  So...time to fire up my copy of Halo 4...

There's always a ton of badges attached to laptop or desktop case...sometime more than you want and when you try to take many of them off, it leaves sticky hell for you to deal with until the next 'puter purchase.  You know...crap like 'Intel Centrino 2' or 'Graphics by Nvidia' and so on.  If you gotta have them, why not have some that you actually want to have on you PC case.  In my case, I chose the ubiquitous 'Meh,' which to most of us geeks, nerds, and dorks to be an expression of indifference or boredom or lack of interest in a topic or discussion.  Legend and lore has it that Meh was first used on The Simpsons, though there are some that try and attach an origin from the Yiddish word feh which translates literally to 'yuck.'   This doesn't really fit though...and the word has gained enormous popularity amongst nerds, geeks, and particularly the online gaming world.  Pretty normal to be chatting in World of Warcraft, EVE Online, Lord of the Rings Online, or Dungeons & Dragons Online and someone will eventually comment 'meh' to some discussion...

A big one now for our next one...a Panasonic DMP-BDT220 Blu-ray Disc Player...

The beauty of Blu-Ray is that you can get into a great one with plenty of features for barely $100.  Now that they're down in those price ranges, you have no excuse not to buy one and slap it into your ever-growing entertainment center.  With built-in WiFi (it connected to my home network in a snap), tons of streaming media apps (there's even a red Netflix button on the remote), and a ton of features to customize your viewing pleasure to your liking, you can't really pass up what most consider one of the best Blu-ray players for 2012.  See the review on CNet if you need more prodding to whip out your Amazon account...

With the new Blu-ray player had to come something to play on it...and the first one I got Indiana Jones: The Complete Adventures! 5 discs, 7 hours of special features, and our favorite whip-slinging archeologist in all his Blu-ray goodness!  This is a great boxed set, and since Kingdom of the Crystal Skull is included, you have no excuse not to have it as a cornerstone of your collection.

And...to cap off the Geek Blu-Ray collection with what may well become the foundation of my new collection... The Lord of the Rings: The Motion Picture Trilogy. 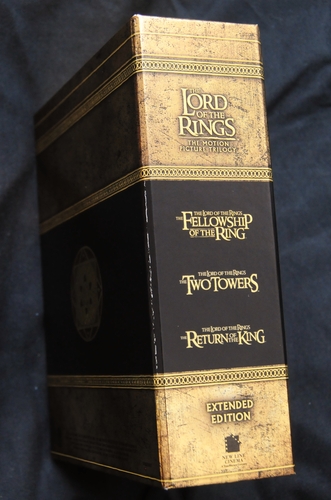 15 discs.  'Nuff said right there.  So far with just a casual glance at it (watching The Return of the King as I blog this), it's simply spectacular! Already have seen a good 5 min of new scenes in the past half hour that were awesome (with the added material, The Fellowship of the Ring is now 3hr 48min, The Two Towers is 3hr 56min, and The Return of the King is a whopping 4hr 23min. With all the extras like interviews and 'making of' stuff, there's over 26hrs of geek pleasure in this box ). Peter Jackson and his editor approached these as a whole new version of the original movies specially created for home HD viewing, and Howard Shore actually composed and recorded a new score for each movie with the London Philharmonic Orchestra to make sure all the new scenes flowed properly. It's a staggeringly cool piece of work that any serious J. R. R. Tolkien fan should pick up.

And with that...I wish you Merry Geekmas to all, and to all a Nerd night!