So, with my mother-in-law jet-setting down to Florida for the holidays, we got this side of the family together for an early Christmas earlier this week.  And with that, came another great geek gift for the holiday season, and one that was extremely apropos considering the end of the Mayan Calendar today... 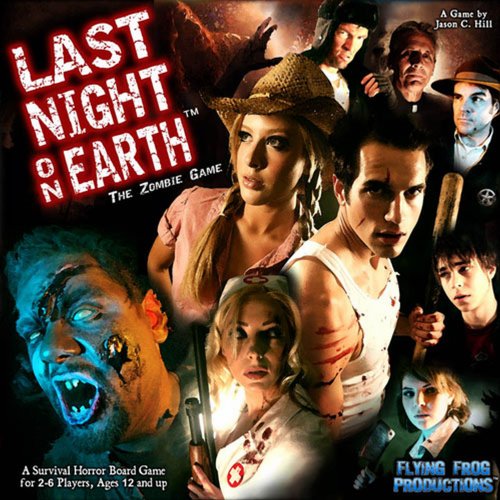 I played Last Night on Earth awhile back at my local game shop (Total Escape Games) when some of my gamer buddies and I were looking for a quick break from the Warhammer Fantasy Battles we were playing at the time.  I enjoyed it, added it to my Amazon Wish List, and voila, there it came in some seasonal wrapping paper.

Overall, it's pretty simple, one or two players play the zombies, the rest play the heroes - those unlucky characters that have to both slaughter the wandering (and aggressive) dead and survive whatever scenario you're playing.  Zombies and heroes are represented by plastic minis that run about on a somewhat-randomly generated board (which changes enough so that it's fairly replayable) that have locations like 'the high school,' 'the gym,' and 'the gun shop.'  Some locations have set items that the heroes can grab, like guns or gasoline cans, and some allow you to search for random items.  Each hero has a card with special abilities on it along with spaces to keep track of wounds.  Zombies don't need cards to track such things...they're zombies and pretty much do what zombies do.

Zombies come from 'The Zombie Pool" and zombies killed simply go back into the pool to respawn depending on rolls and cards drawn...there's a limit of 14 zombies at any given time on the board (since you only have 14 zombies in the box :)  At first glance, the games seems lean toward the heroes...zombies are killed with one hit, and in most cases heroes get two dice to roll vs. zombies with one die (hits go to the highest die rolled, ties go to the zombies), all of this of course can be modified in various situations.  However, the walking dead just keep coming back, and seem to swarm at just the right time.  Weapons run out of ammo and break just when the hero needs them, and as more and more zombie cards get drawn into the zombie player's hand, the tougher the game gets for the heroes to win.

In the game my wife and I just played (a 2 player game pits the zombie player against the hero player controlling 4 heroes), it looked like the zombies were in for a rotting flesh butt kicking as my wife quickly racked up a solid 8 zombie kills.  But then the game shifted, and a huge wave of 8 or 9 shambling corpses began to swarm two of the heroes that got cut off on the wrong side of town, and while they valiantly scored kills, the first hero, the nurse,  fell (for the heroes to win, they had to kill 15 zombies before nightfall - 15 turns - and for the zombies to win, they had to either kill two heroes or hold out to dusk.)  Then, just when the 14th zombie dropped, another got a lucky swipe at the priest and killed the second hero to seal the game in favor of the Zombies.

So far, it's a great game, with a fast pace (easily 45 minutes tops), good replayability, and simple enough rules while still maintaining some good strategy and planning on both sides.  With multiple players (there can be up to two zombie players and four hero players) the coop playstyle should really shine.