If you're one of us...these are probably already bookmarked in your browser.  If not...get with the program! 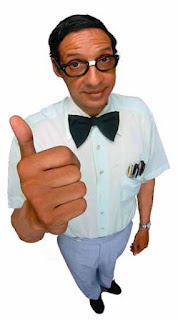 As always, this page is a work in progress and submissions are welcomed!


Thinkgeek - Cool products for technophiles, geeks, and the occasional

monkey.  If you're looking for gifts for me, I have a wish list there...
BoardGameGeek - Nirvana for those that prefer dice to joysticks.  Reviews, ratings, play-aids, even a bazaar of games for swap, trade and sale.  Unplug yourself and break out the Monopoly and Twilight Struggle.

Geek.com - Geek.com has been an online technology resource and community for technology enthusiasts and professionals since 1996.  Basically...the CNN of Geek.

Lifehacker - Tips, tricks, and downloads for getting things done.  One site to streamline yourself in everything from iPhone hacks to how to get extra Dropbox space to how to stop procrastinating.  I keep meaning to do that but just keep coming up with reasons not to...

Kotaku - Game on.  Everything video gaming for the noob to the uber-vet.  Where else do you go to get the skinny on the upcoming CoD title?

Wired - Wired.com is a daily technology news website; Wired magazine is a monthly print publication.  If you have a subscription to Wired, you're cool...if you have the print & digital subscription (so you can read it on your iPad when you were too lazy to bring the hardcopy with you) you're a geek god!

Danger Room - Wired get's at least two entries on the Geek Sites page...Danger Room is all about military and national security tech.  When robots carrying BFG's happens, you'll read about it in Danger Room first...

Gizmodo - Geeks need a gadget guide...gizmodo is that guide.  If you like coffee makers with USB ports, then gizmodo is your place!

Engadget -  Apple and Microsoft; Cowboys and Indians; Engadget and Gizmodo.  Everybody has their favorite gadget site..I prefer to be Switzerland and not choose sides...
ForeverGeek - Cool geek news - if it's not on Gizmodo or Engadget, it might be on ForeverGeek.  At least that's what they say...

Games Workshop - The undisputed king of miniature tabletop wargames...(I know I know...there's a reason they call it 40K...)

GMT Games - A lot of historical and military war and board gaming here - but P500 may be the most ingenious and sustainable game production concept on the planet!  Besides...Twilight Struggle...there, I said it!

Dungeons & Dragons - The seminal forefather of all that was to come in role-playing games.

io9 - They come from the future...and are a daily publication that covers science, science fiction, and the future.  "Time to get ready for tomorrow."

Textual Tees -  Need a nerd shirt for Nerd Shirt Alerts???  Check out textual tees!  Everything from Star Wars to Bacon to Zelda!!!

Geek Dad and Geek Mom - Frankly one of the very best Nerd-worthy sites out there...sometimes I read Geek Dad and wish I had a kid (and then realize I probably couldn't afford my nerd habits if my beautiful wife and I actually had kids...)