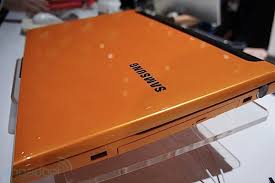 So I finally had to give up the ghost on my previous and much beloved laptop (a Gateway P7801u-FX) as my Nvidia GeForce 9800M just kept crashing to black and finally got to the point that it was just to unstable. Interestingly this was a known issue with the P78 series and the life of the rig could be extended with some tweaks to the clocking of the gpu, flashing the bios to an older system,  and the use of a good cooling pad,  but it finally just got the best of my 'puter and it was time for a new gaming rig.

That rig ended up being a Samsung Series 7 Gamer which received some great overall reviews about Samsung's first big foray into the gaming laptop world.  So far I have to agree...the features in this baby are pretty rich and found usually on laptops in the $2000 range at the least (this model of then 7 Gamer retails around $1600, with used/refurbished around $1100 - I snagged mine as an open box deal on ebay for $990 w/ free shipping.)  The 7 Gamer was the winner of Notebook.com's Best of CES award, Laptop Magazine's Best Laptop and PC Magazine's Best Laptop of CES.

Pretty sure I was going to miss my WuXGA 1900x1600 HiDef 17" screen that came with my Gateway P78...but so far the 17.3-inch display with 1080p resolution (1920 x 1080) and Superbright Plus on the Samsung Series 7 Gamer has really impressed me, particularly with its bright crisp display.  I'm currently sitting on the small deck of a cabin we're vacationing in with the sun overhead and the computer set to green mode and have no problems seeing the screen.
Also under the hood is a 2.4 GHz Intel Core i7-3610QM quad-core processor capable of 3.3 GHz with Turbo Boost Technology, and 2 500 GB giving a total of a full TB of hard drive storage that is assisted with a 16GB SSD drive for lightning fast boot ups and fast load times for commonly used programs.
Installed are 8GB8 GB DDR3 RAM (maximum 4 x 4 GB and a snap to upgrade to 16GB with an easy access cover ), and a  AMD Radeon 7870 graphics with 2 GB of video memory which runs most of today's games on the highest settings.

On the right side is a Blu-ray CD-RW combo drive, which again is rare to see in sub–$2K rigs.  And when you're kicking back to watch The Lord of the Rings Trilogy Extended Edition on Blu Ray you've also got a 4 W Stereo Speaker (2 W x 2) sub-Woofer with Dolby® Home Theater® v4 audio technology.

The 7 Gamer also comes with 2 ultra-fast USB 3.0,  2 standard USB 2.0 ports, and an HDMI port for connecting to a compatible HDTV or home theater system.

The keyboard is more of a throwback to older laptops, with curved keys that pushback a bit giving it a satisfying feel to the keystroke.  The keys are backlit - white during most modes (off in Library and Green modes) and they switch to blue in Gaming mode with the WASD keys lit in red...silly but cheese is often cool.  Not sure how much I'm currently happy with the little touch on/off buttons for sound, wireless, and keyboard lighting at the top of the keyboard...seems a bit much but they work.

There's also a pretty slick rotating knob set in the hinge on the right side that quickly switches power vs. performance modes.  The rotating toggle allows users to quickly switch between four modes: green, library, balanced and gaming. These tune the rig to save power, run quietly (disable the fans), work efficiently or crank performance to 11, respectively.

It is a bit of cheese when you switch to gaming mode. Suddenly, the machine's display fades to black, temporarily blinding the user while a targeting reticule overlays the screen, accompanied by a series of mechanical and digital sound effects. As the desktop comes back into view, that target finds a home in the desktop wallpaper, which darkens to match the hardcore motif that power setting so clearly requires. The notebook's exterior layers play along as well: most of the backlit keys transition from white to blue. The exceptions are the "WASD" keys, which darken to a serious red. Crimson circles now surround the power and volume controls, pulsating along with the sound coming from the machine's stereo speakers. Tread carefully, son, you're in gamer country. The whole show is controlled by (and can be disabled through) Samsung's ModeShift.  One nice feature I've now set up is that when I switch to Gaming mode, my Windows key and trackpad switch off automatically. 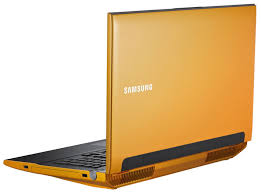 By the way...the (awesome) yellow/orange color of this particular rig is part of this particular model number.  Called "Ferrari Yellow," it comes only with this configuration (that I can tell so far anyway) so the 7 Gamer is available in standard black colors too.  Personally, I love the color.

Only real complaint I and others have had so far that I can see is that it comes with Win 8 installed...no other options.  While on the surface it's nice to get the latest OS with a new 'puter, Win 8is such a radical departure from previous Windows OS versions that it takes a good day or two to get used to.  Frankly now that I've been using it for a week or two, I'm fine with Win 8.  It really isn't this horrible disaster that everyone seems to be laying on Microsoft's design team (which, arguably comes with every other OS version going back to the early 80's).  Just play with it, have some patience, and learn something new for a change.

One caveat...Samsung's updating system for drivers through Win 8 so far is pretty pathetic.  There's a pretty common note that the net card in the 7 Gamer needs to be updated to function properly with many routers...mine was no exception.  The laptop net card connected but the throughput speed was down to a crawl...nearly impossible to load any page in under a two minute period.  However the driver updates showed that the card had the latest driver installed - this was not the case.  Simply navigate over to Intel's Download Center  and install the driver update utility (note this takes some time if you have similar netcard throughput issues as I did...but such is life until you update this driver).  It should steer you toward the appropriate driver for your netcard.  It was a pretty big file so I downloaded over another computer and transferred it to the Samsung via USB drive to install (use the USB 3.0 slots...they are sizzling fast for such things!)  After that I have excellent wireless connectivity and throughput and you can go about fixing everything else!

Other than that, it's a great desktop replacement/gaming rig.  One of the best points for me is that I use my gaming laptops for things other than gaming, so the ability to quickly change configurations via the mode knob is really quite nice (I find that I leave it on balanced mode while plugged into AC when not gaming, and green mode when running on batteries).  And on gaming mode, it rocks.  Crank your settings up to max on most games and play until your carpal tunnel syndrome kicks in. 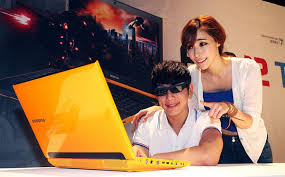 Bang for the buck it's pretty sweet, and you should have no problem snagging one for around $1K.  Yea I would have loved to pick up a new Alienware rig, but my wife would have cut some beloved parts of my body off if I dropped $3K on a laptop these days...and frankly, this Samsung Series 7 Gamer does my just fine...